Menu
Log in
Register
Install the app
You are using an out of date browser. It may not display this or other websites correctly.
You should upgrade or use an alternative browser.

Texas Prepper Founder
District 13
Texas Prepper!
Andreyah Garland, a 44-year-old single mother of three daughters, bought a shotgun in May for protection in the quaint middle-class town of Fishkill, New York. She joined a new and fast-growing local gun club to learn how to shoot.

She has since applied for a pistol permit and constantly hunts for increasingly scarce ammunition – making three trips weekly to a local Walmart. “They’re always out,” she said.

Like legions of other first-time buyers who are contributing to record sales for the U.S. gun industry this year, Garland’s decision to take up arms is driven in part by disturbing news about the coronavirus pandemic, social unrest over police killings of Black people and a potentially contested election that many fear could spark violence.

“With everything going on around us,” she said, “you see a need.”


Surges in U.S. firearm sales have in recent decades been predictably driven by events sparking fears of impending gun-control legislation, such as the election of a Democratic president or a spate of mass shootings, federal gun background check data show. Industry experts and academics who study gun ownership say such surges came largely among the gun-industry’s core base of white, male and politically conservative customers who often already owned one or multiple guns.

That market is widening this year to include a new rush of first-time buyers, including many women, minorities and politically liberal buyers who once would not have considered gun ownership, according to Reuters interviews with more than a dozen industry experts, academics and gun store owners.

“People who don’t normally think about firearms are being forced to contemplate something outside their universe,” said Dan Eldridge, owner of Maxon Shooter’s Supplies and Indoor Range in the Chicago suburb of Des Plaines, Illinois.

The number of first-time buyers has skyrocketed this year, according to industry analysts, trade groups and the CEO of major gun manufacturer Smith & Wesson Brands Inc, Mark Peter Smith. In a Sept. 3 conference call with investors, Smith estimated that firearms neophytes accounted for about 40% of sales this year, an estimate he called conservative and “double the national average” in past years. In a Sept. 2 call, Sportsman’s Warehouse Holdings Inc CEO Jon Barker said the company estimated that 5 million people purchased firearms for the first time across the industry in the first seven months of the year, which matched a recent figure put out by the National Shooting Sports Foundation, a trade group, based on a national survey of retailers.

In a statement to Reuters, Walmart Inc acknowledged supply shortages in outdoor products including hunting but provided no details of its gun and ammunition sales or inventory. “We are working with our suppliers to make product available for our customers as quickly as possible,” the company said.

Among the first-timers is Bailey Beeken, 61, who lives in Riverdale, New York and describes herself as a white, politically liberal, middle-class woman. She started taking shooting lessons this summer, she said, because “whichever way this election goes, it could get really scary, and it could get bloody.”

With the pandemic pitting mask-wearers against mask protesters, and police-brutality protests sparking violent street clashes, “I just feel like it’s a powder keg,” she said. “I want to be armed and dangerous.”

Neither gun companies nor the government releases detailed data on firearm sales or the demographics of buyers. The FBI’s National Instant Criminal Background Check System (NICS) - a widely accepted proxy - shows a 41% increase in activity during the first nine months of this year, compared to the same period in 2019, which was a record year. With 28.8 million background checks through the end of September, this year’s surge has already surpassed last year’s all-time high of 28.4 million.

Background checks verify that buyers do not have a criminal record or another issue that might make them ineligible to buy a weapon, such as an arrest warrant or a documented drug addiction. Less than 1% of applicants are denied, according to FBI figures.

Eight of the top 10 all-time weeks for background checks have happened this year, according to NICS data that goes back to 1998. The top week came in March, when the World Health Organization declared the coronavirus crisis a pandemic. The top month this year came in June, following the late-May killing of George Floyd by Minneapolis police. (For graphics on surging gun sales, click tmsnrt.rs/316cbBP and tmsnrt.rs/3iY33FA )

Shares of Smith & Wesson and Sturm Ruger & Co Inc, the two top U.S. manufacturers, have soared 131% and 59%, respectively, this year. Both companies did not respond to requests for comment.

The historically high sales are adding millions of weapons to a nation that already has more guns than people. The Geneva-based Small Arms Survey estimated the number of U.S. guns at 393 million in 2017. That dwarfed the next highest totals of 71 million in India and nearly 50 million in China -- countries that both have populations four times the size of the United States.

This year’s historic demand has forced buyers and sellers to get creative in finding weapons and ammo, more than a dozen buyers, industry experts and gun-shop owners say. The owner of a shooting range in Monroe, New York, for instance, told Reuters it has started buying ammunition from customers who have stockpiles at home. Online auction sites for guns and ammunition have seen prices skyrocket. Bootstrapping entrepreneurs are hitting estate sales looking for gun collections to resell. In Kenosha, Wisconsin - the site of deadly street clashes after the police killing of Jacob Blake in August - gunsmith Jared Carlson said he has been inundated with calls from would-be customers who can’t find guns or ammo at traditional outlets.

Christopher Metz, CEO of Vista Outdoor Inc - one of the nation’s largest ammunition makers - told analysts in August that it can’t get bullets to its distributors fast enough. “It’s the leanest we have ever seen them in inventory,” he said, noting that the lack of ammunition is particularly frustrating to first-time gun buyers

Gun shop owners and club leaders, in interviews, reported a rush of interest from people who have never considered owning a gun before, often from outside the gun industry’s traditional customer base of conservative white males.

Garland, the first-time gun buyer, is a Black woman and a registered Democrat who voted for Barack Obama. But she also expresses deep dissatisfaction with both parties and says she hasn’t decided how to vote in the November presidential election. She’s one of about 125 members in the new and fast-growing Hudson Valley Nubian Gun Club. More than half of members are female, and more than two-thirds are Black, including founder Damon Finch. He said he started the club in March, as the pandemic hit, and saw another big boost in interest after George Floyd’s death. Finch says he now gets 15 calls or emails a day from people asking about joining or getting gun safety training. Many ask him: “How do I use this tool if - God forbid - I ever have to defend my family?”

In Boston, innovation consultant Eugene Buff, who is Jewish and politically conservative, got a similar reaction when he posted on Facebook this summer that he was a licensed firearms instructor. His first class was booked immediately, mostly with Jewish senior citizens who feared for their safety because of synagogue shootings and the pandemic. “A lot of them didn’t like guns and feared them,” he said, but now they felt a need for protection that outweighed those fears.

Historically, white males are overwhelmingly the biggest group buying guns in the United States. Nearly half of white men in America own a gun, compared to about a quarter of nonwhite men, according to a 2017 study by the nonpartisan Pew Research Center.

There’s not enough data to confirm whether those demographics have substantially changed with this year’s rush of gun-buying, three academic experts on the gun industry told Reuters in interviews. But it’s clear that deep political and racial divisions in this tumultuous year are driving up firearm sales, said Florida State University public health professor Benjamin Dowd-Arrow. In these tense times, he said, buyers across the ideological spectrum view themselves as the “good guys” protecting themselves from “bad guys.”

Current events - along with fears of gun-control if Democrats take power in upcoming elections - are also driving sales among traditional customers, said Eldridge, the owner of the shooting range and supply store in suburban Chicago.

Eldridge is in the epicenter of U.S. gun-buying - driven in part by spikes of violence in Chicago and incendiary political rhetoric over its causes. Illinois is the top state for background checks, with 5.6 million through the end of September, more than doubling the next highest state’s total.

“You have people sitting in their high-rise apartments and seeing the Walgreens store they go to every day get looted,” he said. 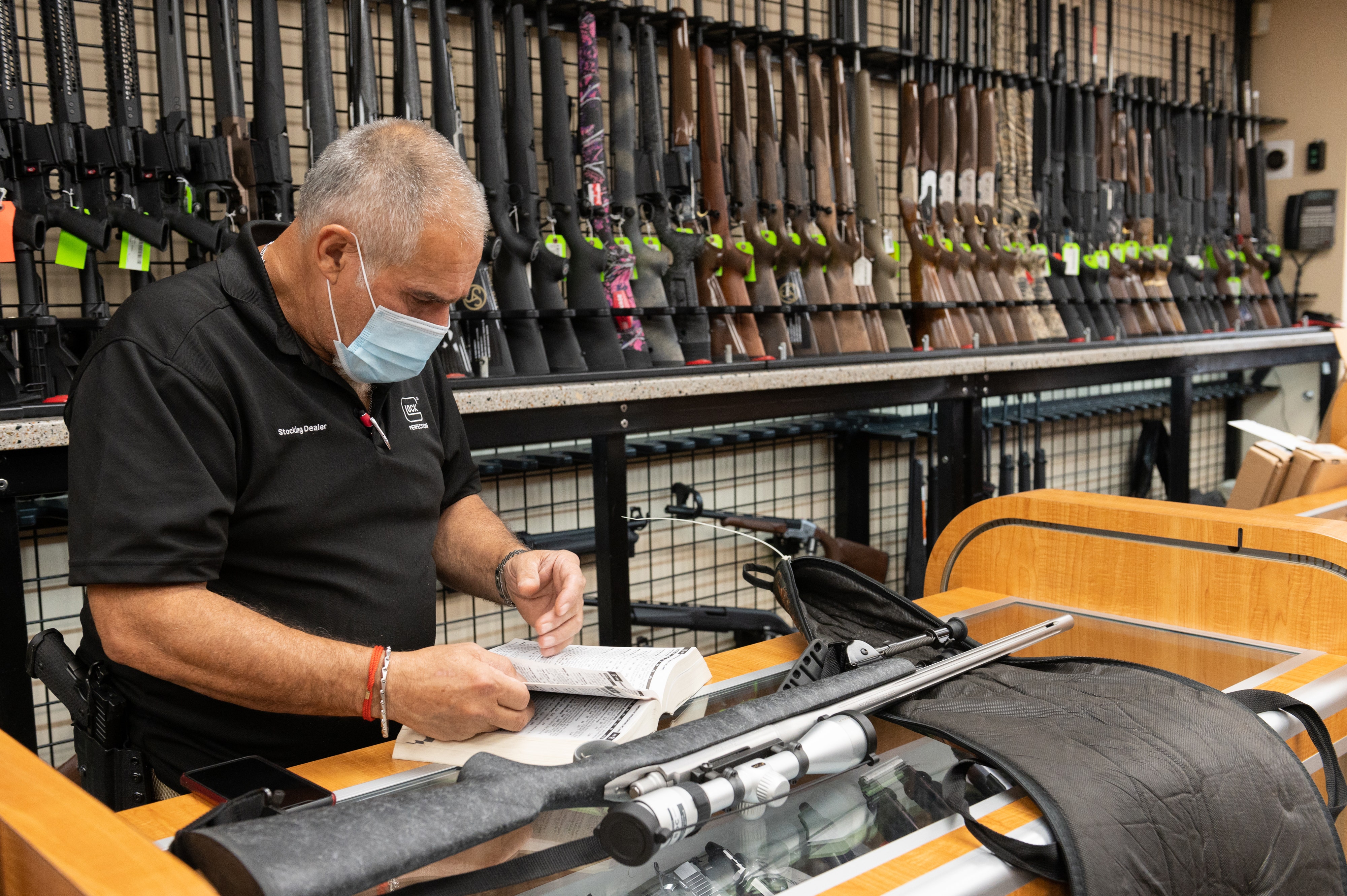 The number of first-time gun buyers has skyrocketed this year, driven in part by disturbing news about the coronavirus pandemic, social unrest over police killings of Black people and a potentially contested election that many fear could spark violence.

District 15
Texas Prepper!
This is both good and bad...
It's good to see more gun owners. That will give anti-gun folks a dent in their vote. Now for the bad... The NSSF has researched and found that 90% of all gun sales in the last 6 months (Mar. - Aug.) were 1st time gun buyers. 97% of all gun owners do not train, practice, or shoot competition. This means that this new gun owners group will must likely buy a gun and a box or two of ammo, then store it at home "in case of an emergency"... I'm just wondering how many people are going to die due to their new false sense of security or accidental death to others as a result of negligence or lack of proper training protocols.
Currently, I have reduced my training from 500+ rounds/month to 100 rounds twice a month. I'm really glad I live somewhat rurally and can still practice as much as ammo availability allow. Also, I reload, which is what I'm using for practice, saving my good stuff for upcoming bad stuff...!!!
Stay frosty and practice, practice, practice...!